Renuka Khandelwal walked into an all-male engineering team in 2010. Flipkart’s first woman engineer reflects on the excitement of startup life and that core Flipkart value of R.E.S.P.E.C.T. 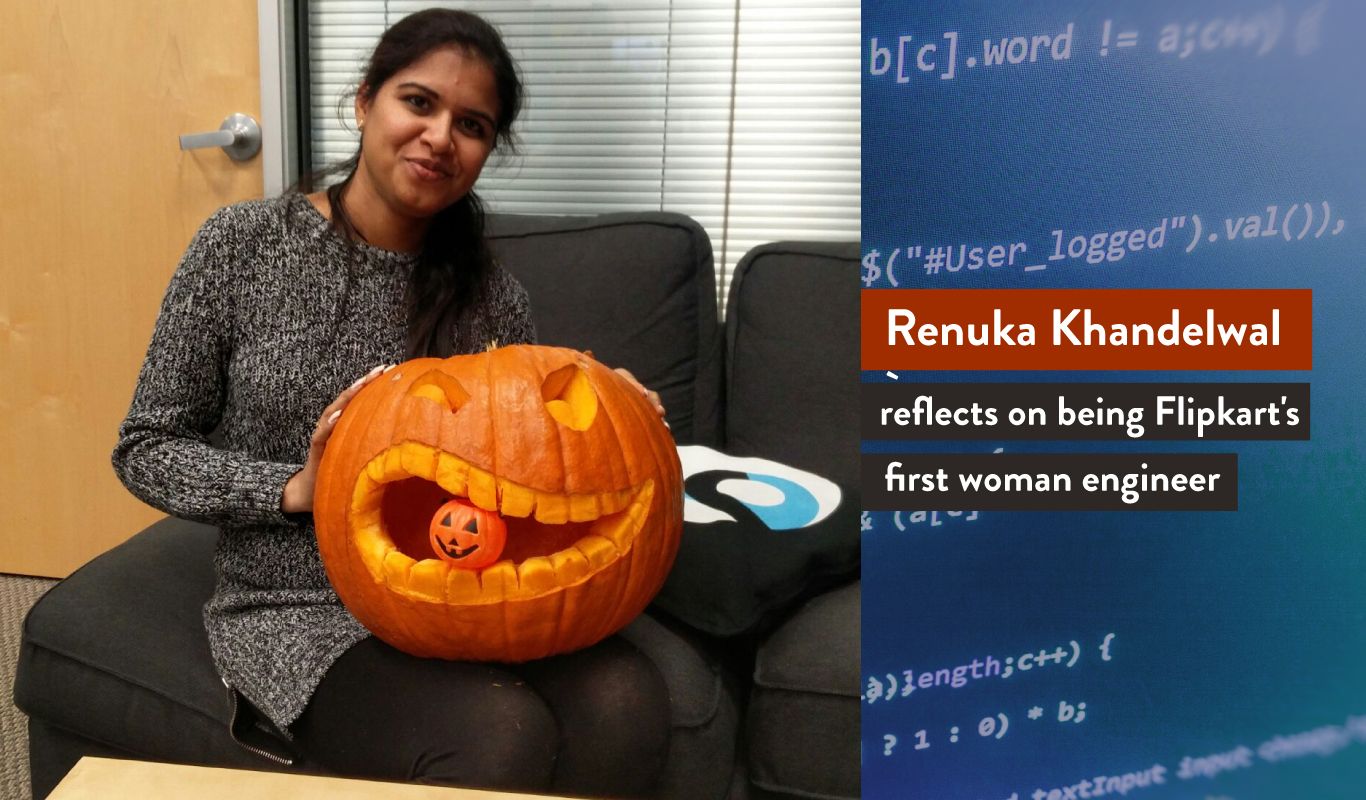 When Renuka Khandelwal accepted an offer to join Flipkart in 2010, she had unwittingly walked into a boys’ club. There were about 25 engineers in the Bangalore-based startup’s high-energy engineering team, and all were men. Being Flipkart’s first and only woman engineer did not rattle her, though. There were other concerns on her mind.

“It was a tough decision to join a startup,” says Renuka, who was about 28 when she came aboard as a software development engineer. “For my master’s degree, I had specialized in data-mining and information extraction. Flipkart, being an e-commerce company, relied highly on that domain expertise when it came to building recommendation and personalization systems. I looked forward to building such a system and Flipkart gave me an opportunity to pursue my passion.”

FlipTales is a series on life at Flipkart and stories of employees, specially curated by Flipkart Stories. Are you looking for jobs at Flipkart? Head over to Flipkart Careers and explore options on how you can work at Flipkart

Her previous stint had been with the Research and Development division at Siemens. “Flipkart wasn’t a well-known name back then. A lot of people asked me why I was leaving a big company to join a startup.”

If Renuka Khandelwal didn’t have an immediate answer to that question, she hit upon it very soon as she immersed herself in her work at Flipkart. After three years with Siemens, this young software engineer from a small town near Nagpur was hungry to work in a dynamic, fast-paced environment where she could see the results of efforts she invested.

“I wasn’t really looking at joining a startup, but I thought that with my drive and energy levels I would be better suited for a company that is fast-paced,” she says. “And Flipkart happened to be that place.”

The pace of startup life

There were three high-level teams in engineering at Flipkart in 2010 — Catalog Management System (CMS), website and operations, which included the supply chain functions and the still-nascent outbound logistics system that was a work in progress. Renuka, who joined the CMS team, was hired by Mekin Maheshwari, who was then the head of engineering. Despite their distinct functions, the teams were close-knit and interacted frequently.

“I had a few interactions with Binny [Bansal] in the first few months when I was building a crawling system,” says Renuka. “Then I moved to the website, reporting to Amod [Malviya, former Chief Technology Officer at Flipkart and currently founder-CEO of Udaan.com]. Although I worked mostly on the backend systems, at that time there was no specific UI [User Interface] team, so I used to take care of the UI design as well. During this time, I interacted a lot with Sachin [Bansal, former CEO and present Executive Chairman], as any UI change needed to go past him.”

Renuka’s primary work revolved around building recommendation and personalization systems. “Building this system from scratch was really exciting because before I started, I only had academic knowledge about this, not industry knowledge,” she says. “It was challenging because it was my initiative to do this, and I was working for the first time on an industry product.”

Renuka Khandelwal reveled in doing work that had an immediate and measurable impact on the business. Flipkart’s engineers wrote robust code and, although things tended to fly off the handle at times, it was mostly organized chaos — a lot like that oft-quoted Einstein quip about a cluttered desk.

Despite being compelled to deliver quick results, the tech team at Flipkart was obsessed with getting it right, observes Renuka in hindsight. “That was one thing I admired a lot about the work culture,” she recalls. “It’s very tough to find this quality in companies where you are under pressure to deliver fast.”

She looks back warmly on what she describes as a “positive work environment” — one that celebrated working together and brushed aside petty personal politics. Ownership, she points out, was a key driver, while employee feedback was highly valued.

“Your work spoke for you,” she says. “You were never judged based on what time you came in or left office, or how good you were at expressing your ideas, or how many years of experience you had.” 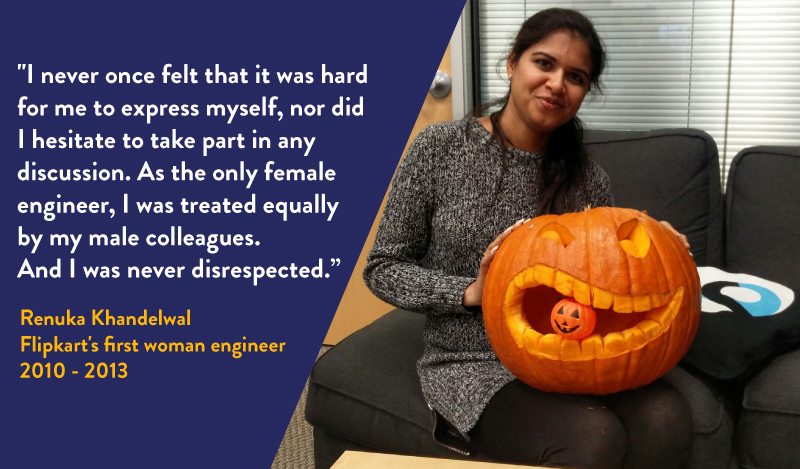 Did she face any challenges being a woman in a male-dominated workplace?

“With Flipkart?” she laughs. “Not really. This may be hard to believe, but from the very beginning Flipkart had invested a lot into building a healthy environment and work culture. I never once felt that it was hard for me to express myself, nor did I hesitate to take part in any discussion. I never felt that it was tough for me to work here as I was the only female engineer. I was treated equally by my male colleagues. And I was never disrespected.”

Respect, much like that addictive Aretha Franklin song, is among the core Flipkart values. It was also a quality that Renuka had grown up with.

Renuka Khandelwal comes from a family of professionals in a small town near Nagpur, Maharashtra. Her father is a doctor, as is her sister. Her two brothers, like her, were attracted to the engineering stream. Although she grew up wanting to be a doctor, Renuka was drawn to engineering once she was in high school. She got a bachelor’s degree from Manoharbhai Patel Institute of Engineering and Technology, affiliated to Nagpur University, and a master’s degree from International Institute of Information Technology, Hyderabad. It was there that she met Anubhaw Srivastava, a student from Varanasi, whom she later married.

In September 2013, roughly a year before Flipkart disrupted online commerce in India with the Big Billion Day sale, Renuka moved on. She joined the Bangalore office of BloomReach, a Silicon Valley firm that offers recommendation, personalization and search solutions to large retail and e-commerce firms. In 2015, she moved with BloomReach to the United States with Anubhaw. In March this year, the couple became the proud parents of Anvika, a baby girl.

Over the years, the gender gap at Flipkart has narrowed as scores of women engineers have joined the ranks. Renuka Khandelwal, Flipkart’s first woman engineer, looks back on her startup days with fondness and pride.

“When I spoke to some old colleagues recently, I heard that the same recommendation engine I worked on is still being used,” she told Flipkart Stories over the phone, a smile lighting up her voice. “Of course, there have been additions to it, but it’s the same platform and the same algorithm. That feels great, you know!”

Read more stories about exemplary Flipsters in our series FlipTales. Relive seminal moments from 10 years of Flipkart in Inside Flipkart. Looking for jobs at Flipkart? Head over to Flipkart Careers and find your fit!

12
12   0
previous Vinoth Poovalingam, the Flipkart fresher who built eKart
next Is Flipkart a good place to work? No way! It’s a great place to work, says LinkedIn