Priced at Rs 11,999, the new Phab 2 from Lenovo packs in no-holds-barred entertainment right into your pocket. Whether you’re on the move or sitting comfy at home, here’s why this phablet is your best pick for non-stop play. 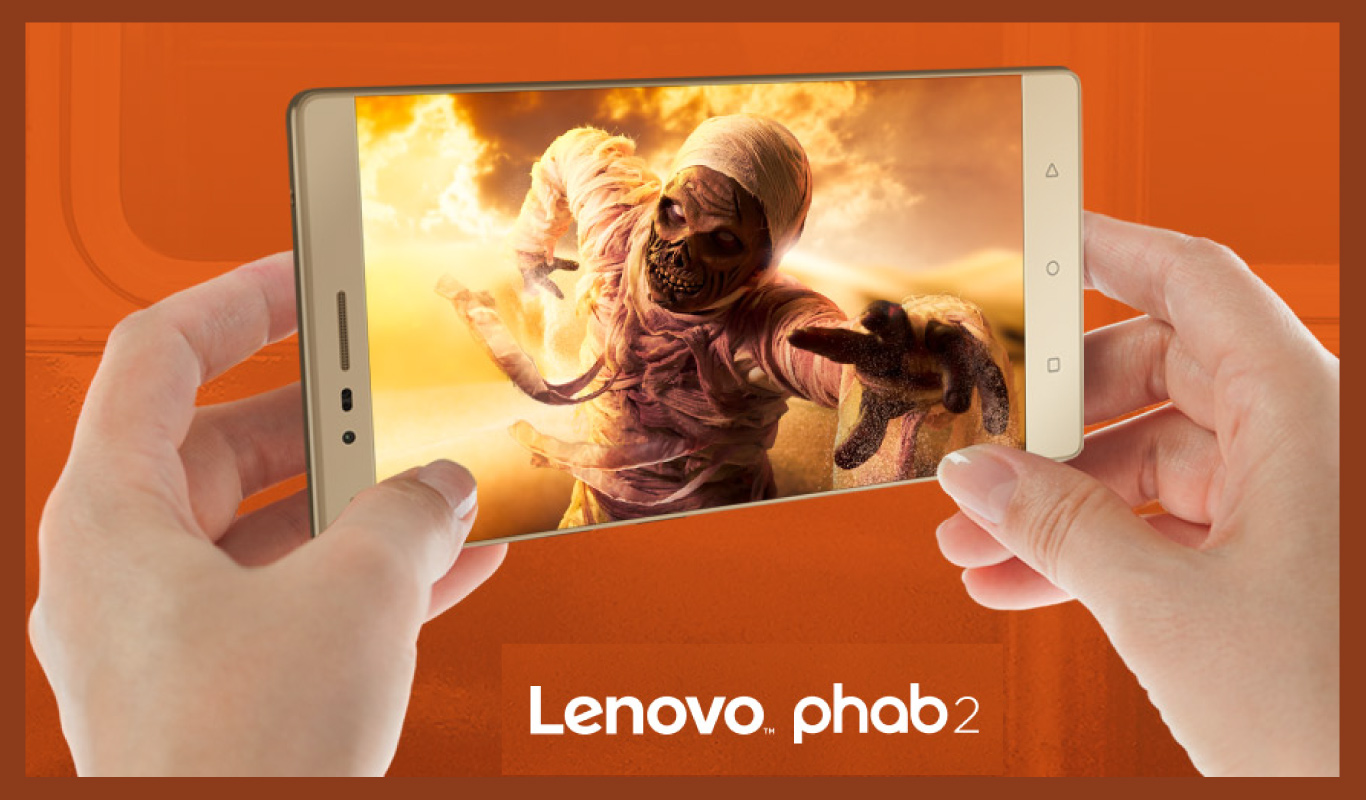 Gone are the days when smartphones were used only for calling, messaging and checking emails. Today, these devices have progressed to becoming powerful all-in-one gadgets. With more processing muscle added to larger displays, you can now enjoy a theatre-like, lag-free movie or video experience. And that’s exactly what the new Lenovo Phab 2 promises.

The Lenovo Phab 2 is the newest entrant on the block, and one that’s already making waves, courtesy its 6.4-inch HD display, Dolby Atmos® cinematic moving audio and 4050mAh battery. It is these specs, coupled with quad-core processor and 3GB RAM, that enable this #GoPHAB phablet to bring the best multimedia experience, right to your palms.

These amazing specs from Lenovo Phab 2 Series is every techie-at-heart's dream! Can't pick just one? We don't blame ya! 😋 pic.twitter.com/PWjOT1BYLb

Watch the official unveiling video of this newest phablet from Lenovo here:

Here’s why the Lenovo Phab 2 is an entertainment dynamo 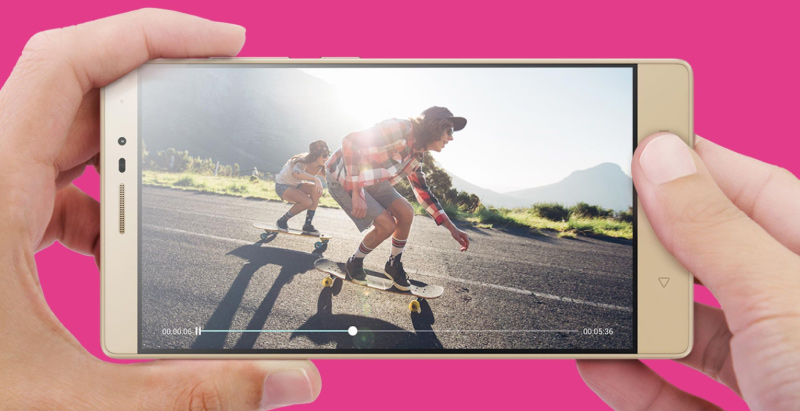 The Lenovo Phab 2 comes with a 1280x720p (HD) resolution on a 6.4-inch IPS screen. With bright and vivid colours and great display even in sunlight, the Phab 2 handles colour contrast brilliantly. The colours look rich, making the phone one of the best picks for movie buffs and gamers. The display also has some hidden marvels such as an adaptive feature, which means you can watch your favorite movies or play the hottest games on your Phab 2 without hurting your eyes. 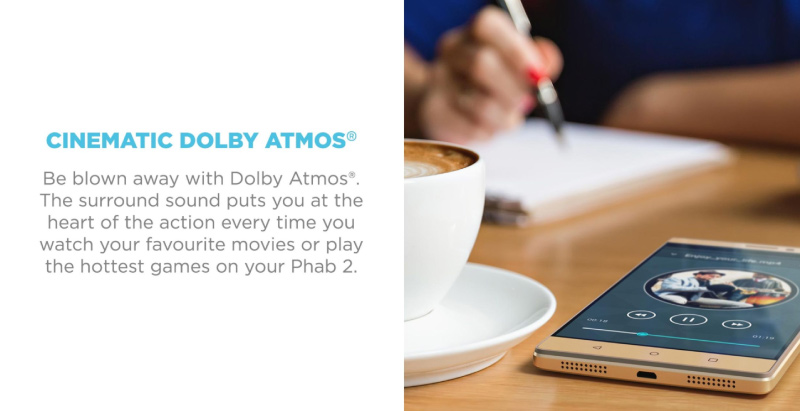 The Lenovo Phab 2 comes with Dolby Atmos® technology to get the most out of its speakers and dramatically improve the audio quality. You’ve probably already experienced the power of Dolby Atmos® in sci-fi movies like Star Trek into Darkness (2013) or Guardians of the Galaxy (2014). In the Lenovo Phab 2, Dolby Atmos allows you to hear a full range of sound in immersive detail and outstanding clarity. Use your Phab 2 as a portable movie theatre, music system or gaming console, and you’ll get to experience the sounds of people, places, objects and music all around and above you. 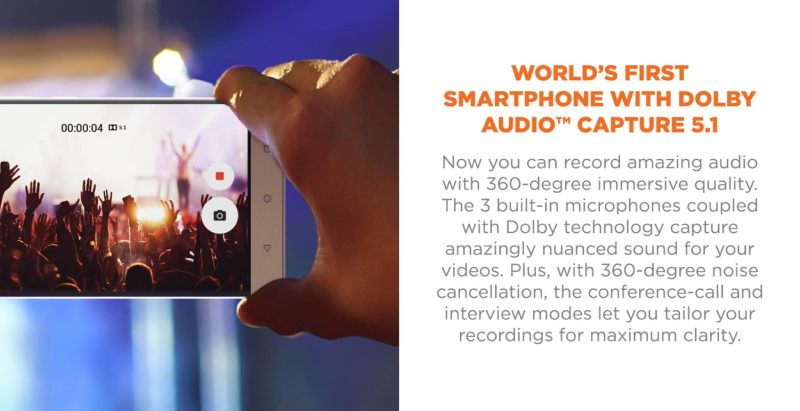 If you’re looking to lend your videos some realism, the Lenovo Phab 2 is a good bet. The phablet comes equipped with Dolby Audio™ Capture 5.1, which uses the phone’s multiple microphones to record audio with 360-degree immersive quality, left to right, front to back. Have you experienced the sound coming from different angles in movies, on TV, or at live events? The Dolby Audio™ Capture 5.1 uses this technology. What you get are videos recorded in a loud and clear style, with easy-to-hear dialogue and true-to-life detail that dials up the overall impact. The Phab 2 also comes with a 360-degree noise cancellation feature for superior voice clarity.

Answer this simple question on the Lenovo Phab 2’s audio feature, and stand a chance to win prizes from Lenovo:

How do you like your music? Guess the PHAB 2 feature, comment, and win* prizes!#GoPHAB on Dec 9: https://t.co/5FRUiXRhsa #PHABFriday 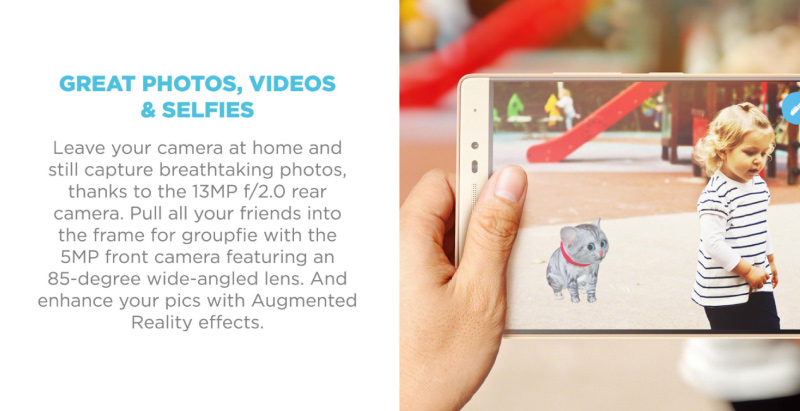 Now you can leave your digital camera at home, because the Lenovo Phab 2 sports a powerful 13MP rear camera with LED Flash and Phase Detection Fast Auto Focus (PDAF). There is a 5MP selfie camera in the front with an 85-degree wide-angle lens. With its detail reproduction and clarity throughout the frame, the cameras are sure to impress you. Moreover, the phablet comes with augmented reality (AR) effects built into the camera app, which allows you to add fantastical effects to your photos and selfies. For example, give your photos the fun factor by adding virtual animals like cats or dogs. Or add funny touches to your selfies with cool props such as glasses and mustaches or emoticons.

‘Phab’ processing hardware for power under the hood 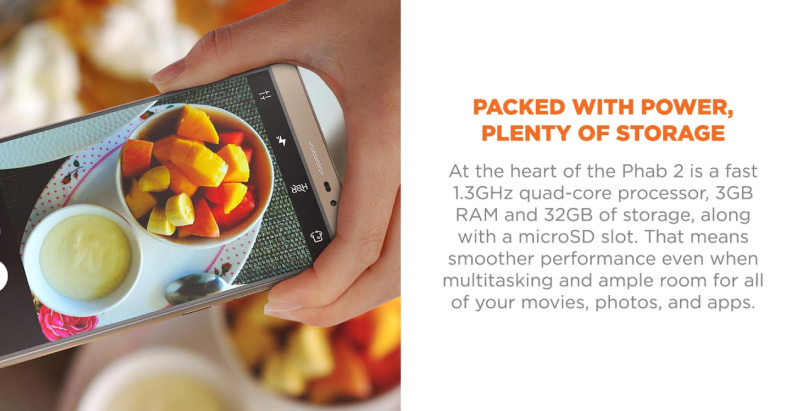 The Lenovo Phab 2 has the processing power to make any game or movie pop off the screen. And the smartphone has plenty of room to hold all that content too, thanks to its 32GB on-board storage. The phablet’s display is driven by a quad-core 1.3 GHz MediaTek MTK8735 processor, which when combined with the 3GB RAM, crunches through background processes and apps with ease. That speed translates into every corner of the Android 6.0 OS as well: photos and video snap faster and web pages unfurl without a hiccup.

Massive battery that stacks up against the rest 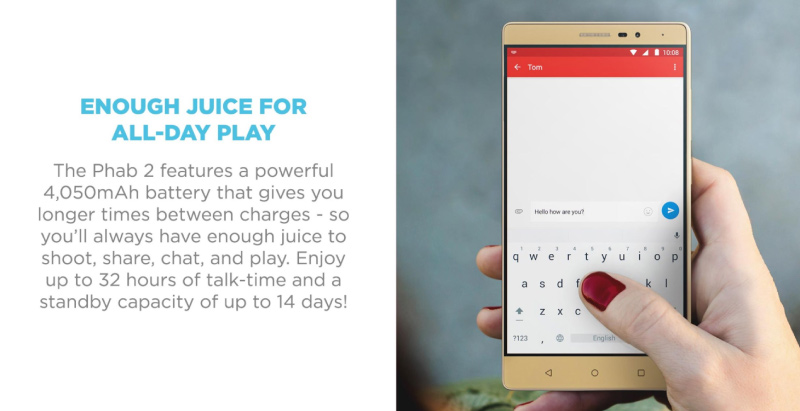 How often have you been left high and dry with a dead phone? Remember the blank screen on the commute home that stops you from watching that latest flick on the go? Or that sinking feeling when you just about to win your favorite video game and your phone switches off? With the Lenovo Phab 2, all these situations are a no-no. The bigger frame of this phablet makes room for a longer-lasting battery, which is a necessity for all the apps, movies and games you’ll be enjoying. The Phab 2 packs a massive 4050mAh battery that can offer up to 32 hours of talk time and about 14 days of standby. A far cry from the phablets that need to be charged every day, often just before you go to bed in the evening, isn’t it?

Click here for more details on the Lenovo Phab 2. Available through a flash sale on December 9, 2016 from 12 noon onwards on Flipkart, this is one entertainment live-wire you just can’t miss!

We had an immensely inspiring start to our webinar

#SafeCommerce for all. At @flipkart, we stand stro