The Disruptors – Asian Of The Year 2016 honors Flipkart founders

As Flipkart founders Binny Bansal and Sachin Bansal are named among the Asians of the Year by Singapore’s Straits Times, a look at Flipkart’s timeline of disruption 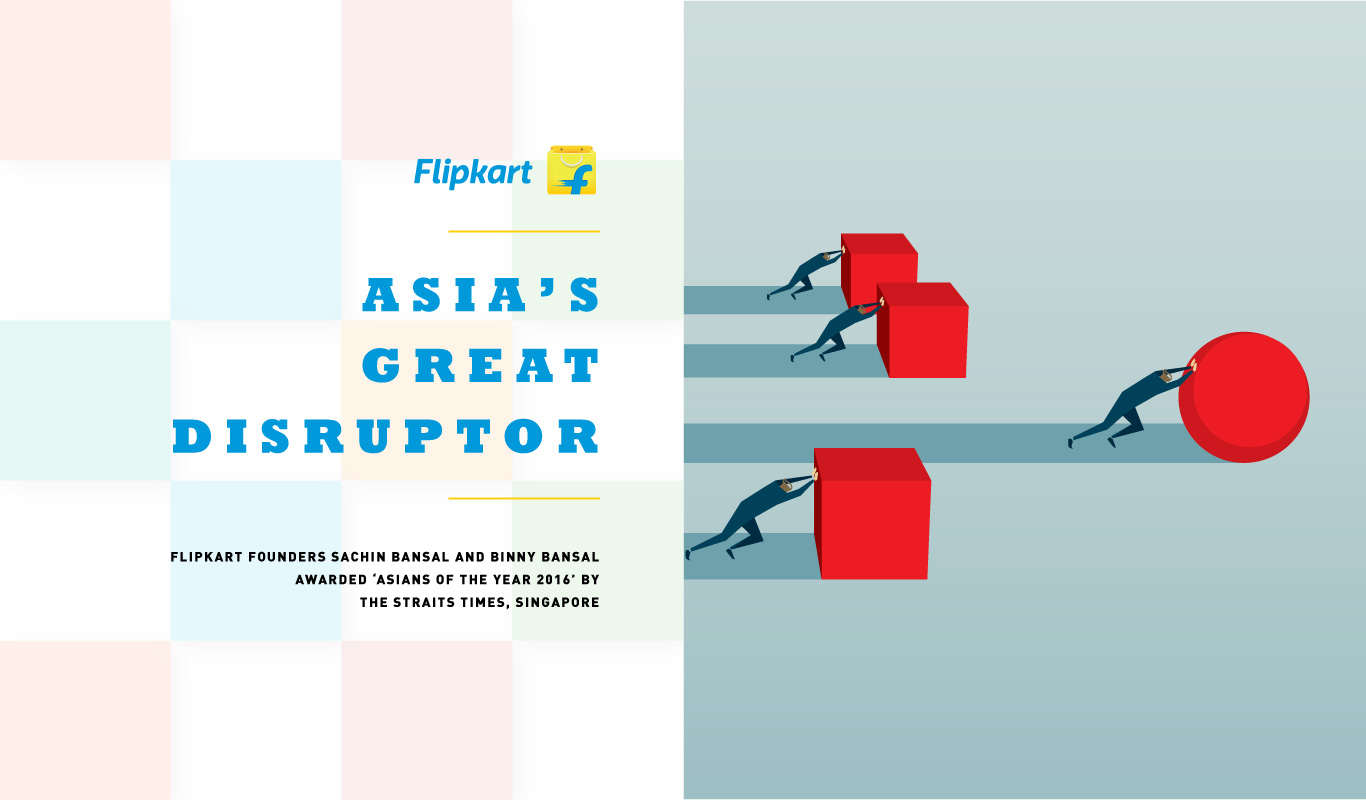 On December 5, 2016, Binny Bansal and Sachin Bansal, co-founders of Flipkart, were recognized as Asian Of The Year by Singapore’s The Straits Times. Announced annually since 2012, the Asian Of The Year award recognizes entrepreneurs “operating at the frontiers of technology’s interface with business” who have launched companies that have disrupted traditional business model for the benefit of end consumers. This year’s winners of the award, collectively known as The Disruptors.

What makes Flipkart a Great Disruptor?

What's the difference between disruption and innovation? A Disruptor, in the words of Harvard Business School professor Clayton Christensen, "displaces an existing market, industry, or technology and produces something new and more efficient and worthwhile." The process, he adds, is at once destructive and creative.” On December 5, Singapore's The Straits Times honored Flipkart founders Sachin Bansal and Binny Bansal as 'Asians Of The Year 2016' among a group of seven Disruptors. Flipkart, founded in 2007, is India’s e-commerce path-breaker. An influential industry disruptor and bellwether for startups in India, Flipkart pioneers game-changing innovations that make a better quality of life accessible and affordable to Indians. Take a look at Flipkart's timeline of disruptions.

This year, the Asian Of The Year jury departed from tradition by selecting a group of individuals, commenting that “credit for the changes sweeping the continent are too widespread to be pinned to a single individual’s breast.” Among the other ‘disruptors’ are Nadiem Makarim of Go-Jek (the on-demand motorbike taxi service that rivals Uber in Indonesia), Anthony Tan and Tan Hooi Ling of Grab (the fastest growing taxi aggregation service in Southeast Asia), Tan Min-Liang of Razer (a company that has revolutionized gaming) and Pony Ma of Tencent (China’s most powerful internet company). The award citation called out that the winners had “made the inevitable march of technology easier to understand and accept by millions of people concerned about their old ways of life yielding to an unfamiliar new one.” Binny Bansal and Sachin Bansal were commended for taking “online shopping to the masses.”

Disruption has been synonymous with Flipkart’s dominance of the e-commerce landscape in India. Since founders Binny Bansal and Sachin Bansal started Flipkart in 2007 and the e-commerce site made its first online sale in 2008, Flipkart has been a pioneer and a trailblazer, unafraid to take big risks and hedge big bets. Since 2007, Flipkart has raised the stakes and made the biggest gambles pay off.

So, who or what are Disruptors, anyway? And how are they different from innovators?

Harvard Business School professor Clayton Christensen, quoted in a 2013 Forbes story, has the answer. He argues that a disruption “displaces an existing market, industry, or technology and produces something new and more efficient and worthwhile. It is at once destructive and creative.” 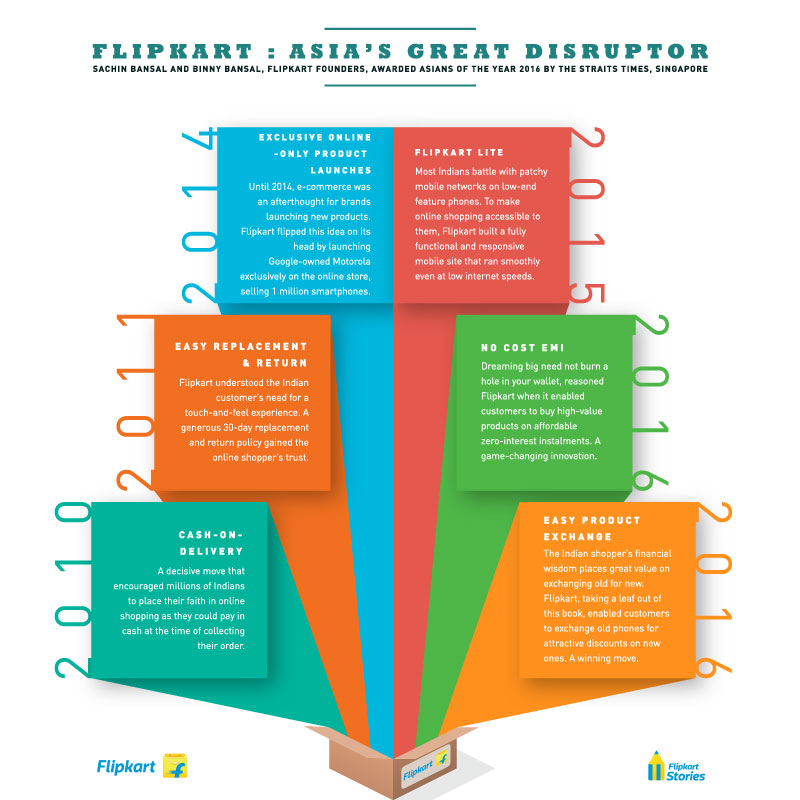 A deep understanding of the Indian consumer’s psyche held a critical advantage for Flipkart. In 2010, just two years after Flipkart made its first sale online, Flipkart made a game-changing move. To encourage more Indians to shop online, Flipkart introduced cash-on-delivery (CoD). What was significant about this move was that at the time only 0.5 % of the population used credit cards. Most customers did not shop online as they did not own cards. CoD allowed consumers to buy goods and pay for them in cash after the product was delivered. This was an industry-defining innovation that made an immense impact upon the market. Today, over 60% of online purchases in India are paid in cash on delivery. This disruption by Flipkart virtually opened the e-commerce market in India and other players followed suit.

What did customers miss most about the physical shopping experience? This was the question that Flipkart’s think-tank pondered before introducing an innovation that endeared them to the Indian online shopper. The answer: the touch-and-feel experience of a traditional shop. Customers wanted to be sure of the product that they were buying. Responding to this concern, Flipkart introduced a no-questions-asked return/replacement policy (the 30-day policy was amended to 10 days in 2016) so that customers could return any product if they were not satisfied with it. This easy return policy was not available in India even in offline retail and it contributed immensely to the growth of e-commerce.

Before 2014, brands had not wised up to the power of e-commerce. Product launches included e-commerce platforms only as an afterthought. Brands traditionally launched their products offline and then included e-commerce as an additional distribution platform. Flipkart changed the game completely. When Google-owned Motorola relaunched the brand in India in February 2014, it chose to go with Flipkart bypassing the traditional retail channel. In five months, Motorola sold one million smartphones, becoming among the fastest smartphone brands to reach the figure. Since then, dozens of brands have chosen to launch with Flipkart including Xiaomi, Lenovo, Le Eco, BPL, Vu Tv and, most recently, the Lenovo Phab 2.

Even as internet penetration makes history every day in India, there remain practical difficulties in making the benefits of the internet accessible to all Indians. Mobile network is patchy and most users have low-storage phones, which makes running resource-intensive mobile apps something of an inconvenience. In 2015, in order to encourage more customers to experience the benefits of e-commerce, Flipkart introduced Flipkart Lite, a first-in-the-world product that combines the richness of a native app with the ease of use and lightweight nature of the web. Flipkart Lite loads faster and offers better experience for users in areas with patchy network. It also lets users access past searches, even if they are in poor network connectivity zones. This technology of progressive web apps has now inspired several companies, including Linkedin, to launch similar products.

Less than 1% of Indians have access to credit cards, and the traditional banking industry has been slow in addressing the need for small personal loans. Access to small-ticket loans for shopping needs is challenging and the process is often cumbersome for Indian consumers. Flipkart’s No Cost EMI entails zero processing fee, zero down-payment and zero interest for customers. Unlike offline offerings, where customers have to make a down payment and pay a processing fee to avail interest-free schemes, Flipkart’s offering has no such hidden costs. This move by Flipkart’s disruptors made high value products like smartphones, TVs, refrigerators, etc. affordable to a large section of Indians.

Indians by nature are value-seeking customers. In stark contrast to the use-and-discard economy prevalent in the First World, Indians by nature have sought to create value for used goods and this has created a demand for old goods at a price structure that is appealing to consumers. The concept of recycling is an age-old concept in India, which has had the tradition of kabadiwalas for centuries. Householders sell old newspapers and exchange old clothes for utensils. Taking a leaf out of this book, Flipkart introduced easy product exchange, wherein customers are given full value for their old goods through exchanging them for new products. The valuation of the product is done online and then it is exchanged when the new product is delivered, making the process seamless. Easy product exchange has not only fulfilled a unique Indian need, but also made new products more affordable for Indians. Another path-breaking move from The Disruptors.

Read more about The Disruptors of Flipkart in The Straits Times