Across India, most organizations are just starting to acknowledge the need for better workplace diversity. At Flipkart, the wheels of change have been turning for a while now and earnest attempts are underway to lead this change. And Flipkart Security is one such team where the transformation is starting to show — today, 33% of the team comprises women. Read on for a behind-the-scenes look at the women working around the clock to keep Flipkart safe. 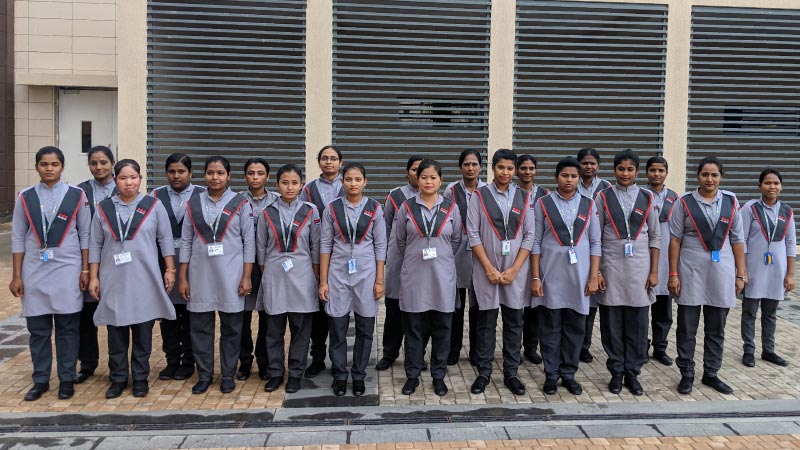 Flipkart’s women security guards are keeping employees safe, one shift at a time.

When we think of security personnel, we usually picture straight-faced, serious men in uniforms. Enter the Flipkart Security Team. In a world where diversity and inclusion are still a work in progress at many organizations, Flipkart has entrusted the security of the entire corporate office and its employees to a shift of security personnel, all of whom are women.

It’s not the first time Flipkart has underscored its commitment to D&I though. In March this year, on International Women’s Day, the company inaugurated its diversity charter, Workplace Equality (WE for short). In addition to this, Flipkart offers its women industry-leading benefits with respect to maternity leave and flexible working hours. There’s also an option for lone women passengers to have a female security guard ride with them in their cab to make sure they get home safe and sound.

Blurring the lines between gender roles

For these women, work is worship, and household chores are dusted off effortlessly. “I’ve been working at Flipkart for three months now, and it’s a great place to work. I finish my shift and get to go home to my family, look after them and spend time with them,” says Shanti Latha, a security guard from Tripura.

“The timings are convenient and the facilities we have access to are very nice,” says Reena Sharma, from Uttar Pradesh.

To make things easier at the workplace, Flipkart gives its women security personnel the option to take a ten-minute break every two hours, take a seat from time to time instead of standing in place for the entire day. “We are wholly-committed towards being more inclusive as a workplace, and what better way to start than to look inward, or in this case, within the team,” says Ratnakar Bade, who heads the Flipkart Security Team.

Ratnakar, a former Major in the Indian Army, drives an organizational goal to increase the representation of women in the security team. He says that Flipkart is working actively to deploy more women security guards at warehouses and mother hubs.

The spirit of inclusion doesn’t stop here, as women comprise nearly half the security personnel at a managerial level as well. Gunbala Sharma, one of the managers who works in Ratnakar’s team, says, “There are obvious physical differences between men and women in this traditionally male-dominated field. However, the mental toughness that the job demands is the real asset, and women are no different from men when it comes to this. That they are women does not take away from their ability to discharge their duties.”