Long plagued by gender stereotypes and a lack of representation, the software engineering field has the reputation of being a “boys club”. This reputation is even more pronounced in India, where family pressure and the lack of a support system cause a lot of women to drop out of STEM jobs after their first few years. However, the trend is changing slowly but steadily, with a new generation of ambitious women engineers leading a quiet revolution in the field. These women are also mentoring younger students to create a new crop of women engineers who receive the guidance they did not receive. We spoke to some of Flipkart’s sharpest young women to get their views on what’s changed, what hasn’t and where they see things going in the future. 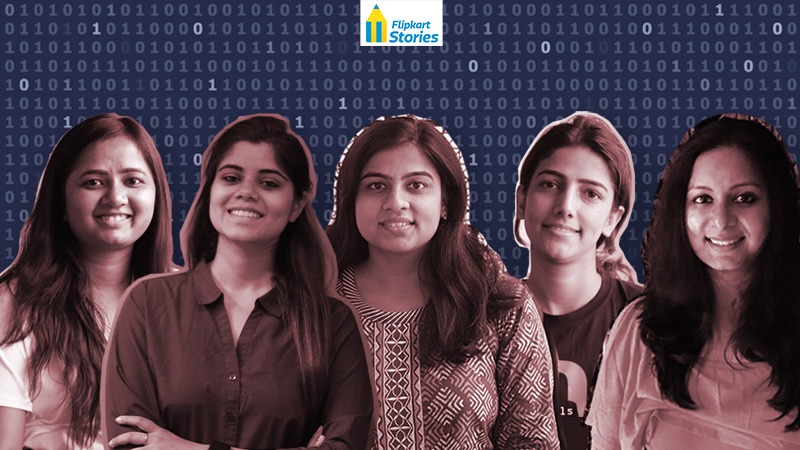 “The great thing about computers is that they don’t differentiate between men and women,” says Prerna Jeslani, a back-end developer at Flipkart. Like many of Flipkart’s women in tech, Prerna has been coding from an early age. She wrote some of her first programs in 6th grade in the BASIC (Beginners All-purpose Symbolic Instruction Code) language, an age-old programming language from the 1980s. “I remember being keenly aware that I was giving instructions to a computer and it was responding to me. It was fascinating,” she says.

Prerna is part of a growing number of women in tech who are reclaiming what used to be — and still continues to be — an overwhelmingly male dominated space. Prerna is a self-described “geek”, someone who has a near-obsessive interest in a particular subject. Geeks have been around since the beginning of time, but if the internet were to be believed, most software geeks tend to be men.

The reasons behind this are complicated. According to Anshdha AK, an IIT-Kanpur graduate and a software engineer at Flipkart, some of this might be down to image issues. “There’s a perception among Indian families that jobs in the humanities, for example are ‘safer’ for girls, so they are encouraged in that direction. That’s why I believe a little bit of guidance goes a long way, especially before college,” she explains.

Anshdha’s sentiment is echoed by Princi Vershwal, who believes that a lack of guidance is the main reason women in tech drop out of jobs. An IIT Roorkee graduate, Princi is used to swimming against the tide. Her major in college was Metallurgical Engineering, but she discovered her love for programming early on. “I realized that I was topping my C++ course with minimal effort, so I joined a programming interest group in my college where I picked up a lot of the skills I use even today,” she says.

For Princi, picking up programming skills was the easy part. According to her, the lack of awareness about opportunities is what hurts women in tech the most. “There are a lot of internships available for women that we just don’t know about. I had to go out of my way to discover these opportunities. For example, in college, I did an internship called the Outreachy internship program, which is a great internship with a very good stipend, but almost nobody was aware of it. I was the first person in years to apply for it,” she says.

The lack of these opportunities is symptomatic of a system that lacks enough female leaders who can mentor and guide young women who want to get into the STEM fields. “When you see another woman in a leadership role, it makes you think, “If they can do it, I can too!”. Similarly, if a woman in a leadership position connects with you and gives you advice, it feels that extra bit special,” explains Anshdha.

But women in tech are combating this with a combination of self help groups and sheer initiative. Princi, for example, is a member of the Lean In circle in Bengaluru. Lean In, an initiative of Facebook Chief Operating Officer Sheryl Sandberg, is a global community dedicated to helping women achieve their ambitions. She also made sure that her experience at Outreachy was helpful to her peers. “After I did the internship, other students approached me about how to apply and I mentored them. Even though it was a complicated process, that year 3 people got selected from our college for an internship that generally only accepts 40-50 applicants worldwide. This was one of my proudest moments in my career so far!” she says.

Painfully aware of the lack of guidance that women in college still face, Princi is, in a way, paying it forward. Like many of Flipkart’s women in tech, she is part of a mentors’ group for Flipkart’s #BcozGirlsJustWannaCode, an online coding challenge for women coders where participants are tested on their skills. The students get exclusive access to these mentors who can be consulted throughout the journey of the program.

Women in tech: impostors no more

“My father was happy with the college I got into in my fist attempt, and he wanted me to continue there. But I knew I could do better. So I decided to prepare secretly,” says Urvashi Singh, a software development engineer at Flipkart, who works with the Catalog team. Two years into her software engineering career, Urvashi’s persistence has brought her to Flipkart.

After spending a semester at a local college in her home state of Haryana, she spent six months furiously preparing for entrance exams, eventually securing a seat at the prestigious Birla Institute of Technology and Sciences, Hyderabad. But that was only the beginning of a tough journey.

“Even in college, my major wasn’t Computer Science. Thankfully, we had no attendance requirements so I used to skip classes and study computer science and do competitive coding assignments,” says Urvashi. Despite clearing one of the country’s toughest entrance examinations, Urvashi says she suffered from impostor syndrome, something women in tech still experience at the workplace.

“Confidence has always been an issue for me. I didn’t feel like I was as good as the Computer Science students. It was only after cracking the Flipkart interview that it hit me: I truly belong in this field,” she explains.

Like Princi, Urvashi too is keen on helping women in tech who may have been in a similar situation. “When I was part of the #BcozGirlsJustWannaCode initiative as a facilitator, I related most with the students who were from electronics and other non-computer science backgrounds. I made it a point to spend some time with them and tell them that I was once in the same position too and if I can make it, they can too!” she explains.

As for the confidence issues, it’s something she’s working on, with a little help from her mentors.

“Six months ago, a senior engineer joined my team, and now I work mostly with her. After she joined, I started learning more because now I have a role model,” she says.

The voice of a generation

Chaitanya Goyal has never taken gender stereotypes about STEM too seriously. When it comes to mathematics, she has been the smartest person in the room for almost all her life. “For as long as I can remember, mathematics has been my primary passion. In fact, my classmates in school used to call me Ramanujan! Even today, every program I create is like solving a new mathematics problem for me,” she explains.

Chaitanya’s aptitude for mathematics didn’t go unnoticed. Her parents encouraged her to pursue her interests from a young age. It wasn’t long before she discovered programming and fell in love with it. By her final year in engineering, Chaitanya was already publishing research papers. “In my final year, my friend and I took up a research project in Artificial Intelligence and developed a new methodology to generate a word cloud. Our research paper got published in the International Journal of Engineering Research (IJER). This is one of the moments I am most proud of in my career so far,” she says.

Chaitanya is of the opinion that the biggest barrier to women entering STEM fields is perception. “Barring a few, most people think that coding is a boy’s forte. But this is not true. There may be fewer girls in this industry but the ones who are there are no less than anyone else,” she explains.

Chaitanya and her peers are part of a generation of women in tech who are at the forefront of a quiet revolution in software. Unfazed by gender stereotypes and confident in their abilities, they are unafraid to be ambitious. “Eventually, I want to be in a leadership position. I know how inspiring it is for other women,” says Anshdha.

It’s not all talk either. This is a generation of engineers who are committed to bettering themselves constantly. “I don’t like to dwell on past achievements,” says Prerna. “What I am most proud of is the positive habits I have inculcated in my daily life. I always make sure that I devote some time every day to work on my programming skills and stay up to date with the latest technology so that I’m always sharp,” she explains.

In fact, Prerna’s motto in life might as well be the rallying cry for her generation.

“I believe in taking risks, making mistakes and challenging myself at each stage,” she says. As India’s women in tech continue to challenge themselves, the gender gap is closing, slowly but steadily.

Also read: Building For Bharat: At #include, Flipkart And Women In Product Join Forces For Inclusive Product Management